How to Stay Safe With 4 Universal Rules of Firearm Safety 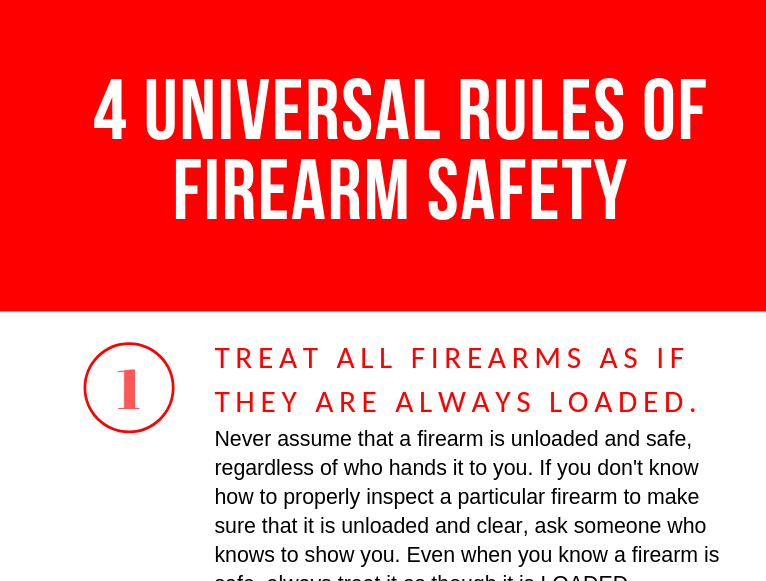 Safety is something that is top of mind for all responsible gun owners. By their very nature, firearms can cause a lot of damage very quickly if they are not handled properly. Below is an overview of the Four Universal Rules of Firearm Safety, including a handy infographic for quick reference.

There are many different versions of the “four rules”, but while phrased differently, they all focus on the same critical points. The text below is adapted from our Buyer’s Guide To Buying Your First Firearm.

Rule #1 – All Firearms Are ALWAYS Loaded

Treat all guns as if they are always loaded (even when they are not). A large number of accidents with guns happen when the handler thinks the gun is not loaded. Treating a gun as if it were loaded at all times is the safest way to handle a firearm.

If you don’t know how to properly inspect a particular firearm to make sure that it’s unloaded and clear, ask someone who knows to show you how.

Never point a firearm at anything that you are not willing to kill, destroy, or pay for. This is the primary rule of gun safety. Pointing in a safe direction is paramount. A safe direction means that you are pointing the gun so that even if it were to go off it would not cause injury or damage.

The key to this rule is to control where the muzzle (or front end) of the barrel points at all times. Common sense dictates the safest direction, depending on different circumstances. Falling bullets can kill, so straight up in the air is not always the best option!

Rule #3 – Keep Your Finger OFF The Trigger

Rule #4 – Know Your Target and Its Surroundings

Be sure of your target and what lies beyond it. This seems obvious, but don’t shoot at a paper target in front of something you don’t want to put a hole in. Bullets pass through most objects, so be aware of your surroundings before you shoot.