Good question – there are lots of choices out there. You want the best training you can get, aligned with your interests.

It’s our experience that firearms training breaks down into 3 categories – no, we’re not talking about beginner, intermediate, and advanced (not yet) we’re talking about the basic philosophies behind the training.

Just to be clear – we have nothing but respect for all of those out there who are teaching firearms safety and competence. We honor the organizations from which they come, and the experiences they may have had to get here. That said, they’re still different:

God Bless the NRA – if it wasn’t for them, most of us would probably have had our 2nd amendment rights stripped away from us completely. In order to be effective on Capitol Hill the NRA has to take as much of a stand as they can to align themselves with the sport of shooting, things like target practice, hunting, and other activities that don’t scare politicians too badly about losing constituents’ votes.

That’s fine, but most people don’t buy handguns to go hunting or score points. They buy them to defend themselves, their homes, and their families, when everything else has failed.

Next most common – Former Military

The military doesn’t believe in handguns. They think that a handgun is only for buying time to fight your way to your rifle.

When the military goes into battle, they know they are going. It’s planned. So they strap on just about everything they can think of to get them through the battle and gather all their friends with all their gear, and take them with them. They train together – a lot. They all know what to expect from each other, and they have each other’s backs.

In fact, it’s like that for all Feds. All those guys from 3 letter agencies (FBI, ATF, DEA, etc.) have a stack of case files on their desks that they are responsible for, and nobody does paperwork more than the government. If they have to go serve a warrant, they suit up and band together just like the military does – they look different, but it’s the same thing. When they go into harm’s way, they know they’re going and they go in teams.

These poor guys live in a dangerous world. They’re as close to your world as anybody can get. Day in and day out (not to mention all night) they are out there, all by themselves, nobody with them, getting in risky situations. You want to go talk to that “Suspicious Person” somebody called in about? The guy hiding in the bushes with “San Quentin” tattooed down his arm? How about the guys in the alley with the spray paint? You think they’re friendly? Going to loud parties, family disturbances, bar fights, you name it. It’s all just awfully unpredictable.

The vast majority of the time they get through those things unscathed. The ex-con comes out of the bushes and doesn’t resist, the guys in the alley take off in the opposite direction, no drunk at the loud party tries to take your gun, etc. Guess what you get now? Complacent. You fight it. You tell yourself to be careful out there. Your friends, family and fellow officers tell it to you almost every day, but you can’t help it.

Then that day comes – you’re doing a field interview on the sidewalk with a couple guys when one of them yanks a pistol out from under his sweatshirt. What you do now is for all the marbles. You can’t afford to do anything wrong. You didn’t get to plan for it, your platoon isn’t here, and Sylvester Stallone didn’t show up. It’s all on you buddy – you and the training you’ve had.

That’s the kind of thing Law Enforcement Firearms Instructors are dedicated to getting you through. They’d give ANYTHING to be there with you. To take those other guys out, to watch your back, to warn you about other factors, to get you to cover. That’s all that Law Enforcement Instructors think about. They never get complacent because they are always trying to make you better, faster, more accurate, more tactically sound. They can’t be with you in the back corner of that parking lot in the dark, so they make sure that everything you do out of habit is what is going to keep you alive. 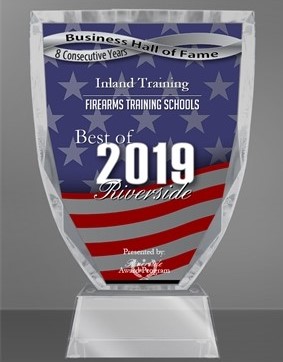 We’re extremely proud to have received the Best of Riverside award for 8 consecutive years!