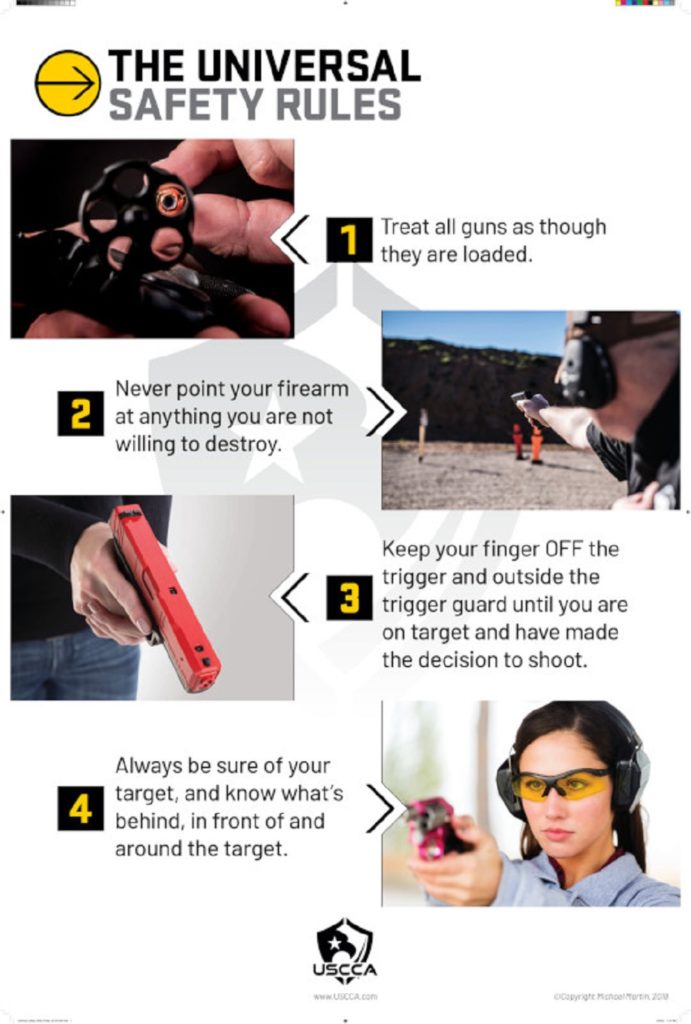 By itself, a firearm is an inert object. By itself, it doesn’t just “go off.” Insert a human being and a negligent discharge can occur when the proper safety rules aren’t followed. Although we’ve all heard the old adage, “Rules are made to be broken”, the four universal safety rules explained here are designed to keep you, and everyone around you safe. If there is any exception to these rules, it is only under the strict control of a defensive shooting instructor, a range safety office. For example, in many of the advanced courses hat the USCCA teaches, students will have an opportunity ty practice drills which may include pointing dummy, SIRT, or simulation firearms at each other, but those drills are only allowed under the strict control of a qualified instructor. If in doubt about whether a rule is or should be temporarily violated, ask your instructor or range safety officer!

Treat All Guns as Though They Are Always Loaded

Most firearm “accidents” occur with firearms that the users had sworn were unloaded. Never, never, never grow careless with a firearm. Every single time you pick it up, perform the proper clearance procedure, and educate those in your household how to do the same. Treat a firearm that you’ve just unladed with the exact same respect as one that you’ve just loaded

Since your firearm has to point somewhere, you should always ensure that it’s pointed in a direction that can serve as a backstop, and will not cause a dangerous ricochet if the firearm where to discharge. That criteria would indicate that pointing the firearm straight up or straight down would not be considered a safe direction, since a round negligently fired up may penetrate a ceiling; ricochet off the ceiling; or travel for thousands of feet if fired outside; and a round fired starlight down can penetrate a floor or ricochet off the floor or ground.

A good method to practice this rule is to pretend that a laser extends out from the end of the barrel. You should NEVER let that imaginary beam touch anything that won’t stop a bullet (that includes any wall, ceiling, or floor) or ANYONE (that includes you own hands, legs, or body) unless you are in a defensive situation and all criteria is present for the use of deadly force.

Keep Your Finger OFF The Trigger and outside the Trigger Guard Until You Are on Target and Have Made the Decision To Shoot!

Until these criteria have been met, your finger should be starlight and placed firmly on the frame of the firearm.  Your trigger finger should be in this location whenever you are not shooting, including when you are clearing a malfunction or reloading. The finger should be completely above the trigger area, not on the trigger guard, and not blocking the ejection port. In a defensive situation, do NOT put your finger in the trigger guard unless all requirements have been met for the use of deadly force. Training consistently with this method will avoid a negligent discharge in a stress situation, when your body’s natural adrenaline dump will cause the strength of your grip to increase.

Always Be Sure of Your Target and Beyond

Said another way, you must POSITIVELY identify your target before you shoot and you MUST be convinced that anything that you shoot at (a target on the range, or an attacker in a parking garage) must have an effective backstop to stop your bullet, otherwise you MUST NOT SHOOT! In addition to knowing what is behind your target, you must also know what is to the left, the right, in front of, above and below your target. Whether you’re practicing at the range, hunting in the wilderness, or involved in a defensive situation, remember hat every round you fire will continue in a straight line until it impacts into a target. You must be convinced that it will stop in the target of your choice, rather that a “target” that you didn’t see, or weren’t aware of.