Meet the Inland Firearms Training Staff, all of whom are dedicated to making sure that you receive the highest quality firearms education and training.

Ken began shooting as a boy of 10 when he somehow talked his Dad into getting him a Marlin bolt-action .22 and went to the NRA Hunter Safety Class. During his college years at Cypress College, he worked as an instructor at the Winchester-Watson Trap and Skeet range in Carson.

Also while in college, at San Jose State University, Ken was the victim of an armed robbery and had to use his shooting skills with a Smith & Wesson .357 revolver to survive an attack. His experience with Law Enforcement and the Courts led him to volunteer as a Reserve Deputy with Law Enforcement in 1987. In 1992, he attended the FBI Firearms Instructor School and began teaching at the Academy. Since then, he has attended other Instructor Schools and wrote the Firearms Instructor’s Handbook.

Before retiring after 30 years of service in 2017, he regularly did “Use of Force” training for the Department where he instructed and evaluated Law Enforcement Officers in the use of Handguns (both revolvers and semi-automatics), shotguns, patrol rifles, and other firearms, as well as the use of Chemical weapons (Pepper spray, mace, tear gas, etc.), Impact weapons (batons, etc.), and Defensive tactics (he holds a Black Belt in Kung Fu). He is a Certified Armorer for Glock Pistols and AR-15 rifles, and an Emergency Medical Technician.

Additionally, Ken taught under contract to the Federal Government’s Homeland Security Department, working with Federal Flight Deck Officers who are Pilots that have been Deputized and armed to defend their aircraft against terrorists.

Because of Ken’s background, training, and experience, he brings a wealth of knowledge and skills in tactical shooting scenarios that our Students can take advantage of and benefit from.

Before retiring in 2017, Ken’s “Day Job” was working for United Airlines as a 747 Pilot. All that time in college teaching and surviving with firearms was to obtain his degree in Aeronautical Operations. After graduation, he worked as a pilot in several jobs, “working his way up”. In the 1980s, he owned and operated a Flight School (Pacific Flight) at Riverside Airport, where he was the Chief Flight Instructor, the Chief Pilot, the Director of Operations, and the janitor.

He managed 23 airplanes, 3 helicopters, and over 30 full-time employees in the Flight School, the Air Charter business, Aircraft Maintenance Facility, and Fuelling Service. Many people he taught to fly are now airline pilots for various airlines. He has also served as an instructor and Evaluator for United Airlines.

With vast experience as a teacher in both Aviation and Law Enforcement Firearms, Ken’s teaching skills and abilities are a welcome addition to Inland Training.

It is with deep sadness that we report that on February 24, 2021, Ken passed away at the age of 70, following a battle with Leukemia. Ken founded Inland Training and was its Director of Training. Ken served as a Level 1 Reserve Deputy from February 1987 through May 2017, during which time he volunteered countless hours at both the training division and Specialized Investigations.

Ken is survived by his wife Jeannie and daughter Mary. The instructors and staff at Inland Training will forever miss his humor and upbeat spirit.

Scott purchased his first rifle at age 16, a Remington model 561 bolt action 22 long rifle. For many years Scott learned to shoot the hard way through trial and error until at age 22 he entered the Los Angeles County Sheriff’s Academy where he received his first formal firearms training. After a short stint with LASO, he worked as a paramedic, ambulance driver, medical supply salesman until he started an insurance agency in Riverside CA.

Scott is also a co-founder and partner in ÆGIS PACIFIC Insurance Service and HR Ledger, a national payroll service. He has taught adult education in the Insurance and business management fields and lectures on business lessons for new business owners.

In 1986 Scott was sworn in as a Reserve Deputy Sheriff with the San Bernardino County Sheriff’s Department. Having served as a pilot in the aviation division he went on to become an Instructor at the Sheriff’s Academy. On moving to the range he became a Use Of Force instructor and in 1992 he and Ken McGreevy took the FBI Firearms Instructor course. He wrote the course study manual for the classes teaching reserve deputies the use of firearms. Scott retired from the Homicide Investigation Unit after 35 years of service as a Reserve Deputy.

Scott graduated from Cal Poly Pomona with a degree in business administration and is a Life Underwriter Training Council Fellow. He lives in Irvine, California with his wife and daughter and enjoys photography, shooting, camping, motorcycling, and traveling with his family. Scott still has that model 561 and plans on passing it to his daughter one day.

Working within the criminal justice system for most of his adult life, Jim Long has developed great patience as well as a passion for teaching and encouraging people to be the best that they can possibly be. He teaches and tests both civilians and law enforcement officers for their handgun handling competency.

Jim is a United States Marine Corps veteran, where he spent four years before going to work for the Arizona Department of Corrections. There he worked with very troubled inmates and was additionally weapons qualified. For the past twelve years, Jim has worked with the San Bernardino County Sheriff’s Department as a supervisor in the Corrections and Detentions Bureau.

The son of a Los Angeles County Sheriff’s Deputy, Laguna Beach Police Detective, and Arson Investigator, Kevin learned about firearms at a young age. Always eager to improve his skills, in recent years he trained under the tutelage of Inland Training, first as a student and later as an instructor. Kevin is both an NRA Certified Pistol Instructor and an Inland Training Certified Instructor. In addition to his role as an instructor, Kevin also helps to manage Inland Training’s operations, website, and marketing efforts.

With more than 20 years of experience in Supply Chain, Operations, and Regional management, Kevin is currently the Director of Operations for a multi-generational citrus grower and packing company. Kevin also serves on the Board of Directors of Sunkist Growers, is a Small Business Consultant/Fractional COO, and operates an aviation website designed for new and aspiring pilots.

Brian started his love for guns as a little boy, but especially after his dad bought him his first BB gun at eight years old (and he didn’t shoot his eye out). After Brian was married, he and his wife decided to buy a handgun for home defense, but they both knew they wanted more training before they had a handgun and kids in the home.

Steve joined the Inland Training family in 2017 and has taught all levels of students. Steve is a retired Sergeant from the San Bernardino County Sheriff’s having spend 30 years with them. In his time with the Sheriff’s Department, he worked a number of assignments including custody, patrol, detectives, Homicide, Traffic Accident Reconstruction, and was a Certified Drug Recognition Expert. Steve was also certified in criminal trials as a “firearms expert”.

A firearms enthusiast for many years, Steve didn’t actually fire a gun until he was 22 years old and in the academy. It’s never too late to start. Steve is an NRA Certified Pistol Instructor and Range Safety Officer and has taught civilians and deputies how to become proficient shooters, but, he feels teaching his daughters how to safely handle and shoot firearms as his greatest accomplishment. Not content with retirement, Steve keeps busy working at Inland Training and being the Business Development Manager for First Tactical apparel. While he appreciates a number of firearm brands, Steve considers himself a CZ snob. “I was a CZ guy long before the hipsters discovered them!” 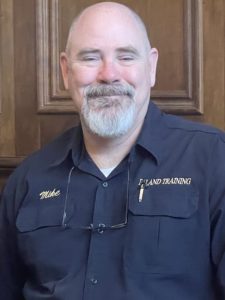 Mike Page fell in love with firearms when he was taught to shoot by his father over 50 years ago.  Since getting his first .22 rifle at 8 years old, Mike has been involved in firearms and firearms training in one form or the other.  At eighteen, Mike became a Military Policeman with the US Army, eventually becoming a SRT member both as an entry team leader and sniper.  After serving his country, Mike became a police officer with a city in Los Angeles County, where he spent the next 25 years in law enforcement as a Field Training Officer, motor officer, crime scene investigator, narcotics task force officer and field supervisor.

After retiring, Mike remained in law enforcement, working for the San Bernardino Co Sheriff’s Office.  Mike currently reviews all bookings at the county jails and is a unit armor, where he is responsible for all rifles, shotguns and pistols assigned to the deputies he works with.  While working at West Valley Detention Center, Mike was introduced to Jim Long and Scott Evers when his wife took Inland Firearms Training Basic Handgun class, and after forming a friendship, was asked to join Inland as a Range Safety Office and eventually a firearms instructor.  Mike has a passion for providing the best and safest firearms training possible, and truly enjoys working with those new to the shooting sports.

Her career path has been mostly in office management. During Spring of 2021, she was offered the opportunity to build the women’s division for Inland Training, which she excitedly accepted.

Sandy believes her passion for firearms and experience working with women professionally and in ministry (not to mention growing up with 5 sisters, raising a daughter and being a volleyball mom), will all come together making the Inland Training Women’s Division a great success.

A Southern California “baby boomer” native, Joe was raised during the golden age of television westerns. Growing up, all of his heroes were cowboys. It was not until he entered military service, however, that he received his basic handgun and rifle training; earning his first firearms expert ribbon.

He is presently a firearms instructor under contract for the Department of Homeland Security and an instructor for Interarms Training.

Tim’s law enforcement career spans four decades. Beginning in 1985 with the Los Angeles County Sheriff’s Department. He retired in 2018 as a Commercial Enforcement Officer and Collision Reconstructionist on the Major Accident Investigation Team for the Rialto Police Department, after serving the Rialto Community for 15 years.

While employed as an administrator and lead investigator for a class action law firm, Tim was an instructor for the San Bernardino Valley College in the PC 832-Police Science Studies and part of the San Bernardino County Sheriff’s Academy as a Firearms Instructor and Use of Force Instructor with collateral duties in the High Altitude and Mountain Search Operations, all as a Reserve Deputy Sheriff. Additional professional experience includes private contracting and executive protection for major corporations, high profile clients, and clandestine facilities. He has also been retained as a consultant and expert in both civil and administrative use of force and firearms matters.

During Tim’s career, he earned numerous awards from the State of California, Rialto City Council, District Attorney’s Office, Chiefs of Police, Captains, Lieutenants, and Sergeants for outstanding service. Two-unit citations for Valorous Actions. One by the National Tactical Officers Association and the other Meritorious Service award from Veterans of Foreign wars; Special Recognition and a thank you by the United States Department of the Interior for testimony as a Firearms expert during a Board of Review on the discharge of an AR-15.

During the past 25 years, Tim has trained civilians, law enforcement, tactical teams, and military personnel. The instruction encompassed all levels of “Force on Force” and firearms training, from basic to advanced. His teaching philosophy is simple; “The success and skill of the student is a direct reflection of the instructor”.

Teaching techniques must be fluid, with the ability to build from the student’s strong points while addressing their weak areas, resulting in increased confidence and skills for the student. A complete “Force on Force” and “Firearms” training curriculum will cover not only the physical and mental skills but also legal aspects both criminal and civil.