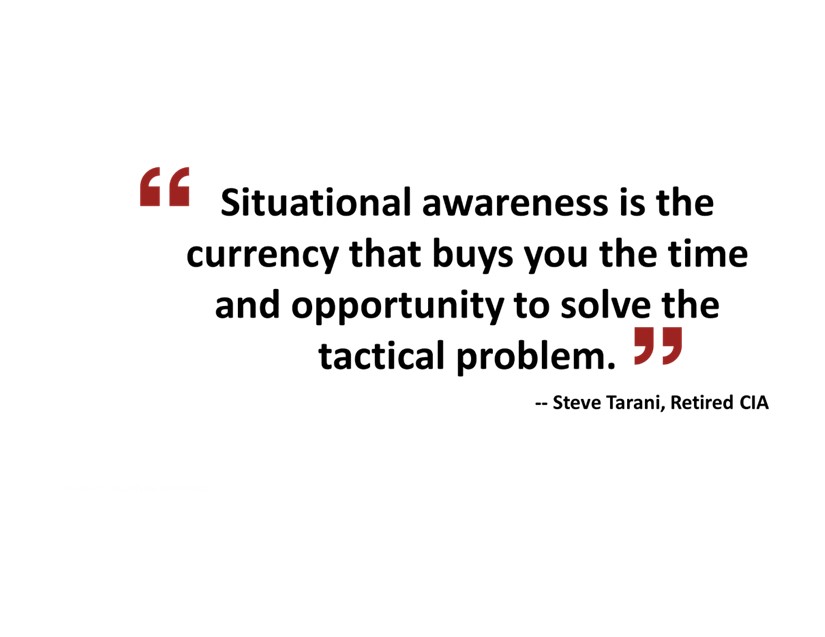 Breaking the attack cycle, what does that mean?

The attack cycle is the process a predator must follow for his attack to be successful, given the mechanics of nature. There are 5 steps a predator takes; they are as follows: The predator

It’s important to remember that a use of force is not the only possible outcome when it come to a violent encounter. The three possible outcomes of avoidance, escape, or defense, share a key element, and that’s that second’s count. If we go through life with a complete lack of awareness of our surroundings, the first two options are typically off the table, and our ability to defend ourselves is seriously limited. Think about the warning time that each of the outcomes might require. For us to avoid a dangerous situation in the first place, we might need anywhere from 60 seconds to five minutes to be somewhere else. For us to escape from a dangerous situation that’s already in motion, we might require at least 30 seconds of prior warning. For us to defend ourselves from a dangerous situation when it’s too late for avoidance or escape, we’ll still require at least several seconds of warning to find cover and/or draw our firearm. You can see pretty quickly that being unaware of our surroundings doesn’t leave us with too many options.

So how do we gain crucial seconds necessary to avoid or escape, or the few extra seconds that we’ll need to find cover or draw our firearm if “defend” is the only option left to us?

A good start is to develop a keen sense of situational awareness. Like it sounds, situational awareness is an awareness of our immediate vicinity and of the people and objects within that environment. Being aware of our surroundings doesn’t mean that we need to hire a surveillance team to scout out our shopping area in advance, but it does mean that we need to lift our heads up and observe more than just the cell phone in our hands while we text a message, or the few feet of sidewalk immediate in front of us.

When thinking about an awareness of our environment, we need to think about the 360-degree circle surrounding us, not just the individuals or objects to our front. When we move through public areas, we should think of a “bubble” surrounding us and our loved ones, and we need to be aware of everything and everyone inside of that bubble. Think about the way the secret service keeps a mobile bubble around the President of the United States. The secret service observes and categorizes everything within that bubble to identify any possible threat before it strikes. While we operate our own lives on a different scale, we can be no less vigilant – we are, in effect, our own bodyguards and first responders. Since we’re lacking dozens of agents and overhead imagery, how do we go about monitoring that bubble around us? First off, it means that we need to lift our heads up from the sidewalk or our cell phones, and we need to watch where we’re going. To get a 360-degree look at our surroundings, we’ll need to use not only our peripheral vision (which provides about 180 – 200 degrees of visibility), but we’ll also need to actually swivel our head to scan the area to our front, sides, and rear.

If you have a firearm and your attacker has a knife, you survive every time, right? Not necessarily. Lieutenant Dennis Tueller of the Salt Lake City Police Department demonstrated that simply having a firearm doesn’t mean you could bring it into action in time to protect yourself unless you closely observed threats (situational awareness) within your protective bubble. Lieutenant Tueller observed that with practice, the average shooter could place two shots on target at a distance of 21 feet n about a second and a half. Tueller then ran another set of tests to determine exactly how quickly an “attacker” could cover that same 1.5 seconds. Based on Tueller’s experiment, most police departments in the U.S. now consider anything within 32 – 50 feet to be within the “danger zone,” where an office should be prepared to issue commands, increase distance, or gain access to a firearm.

So how do we break the attack cycle?

The most important thing to remember is practice situational awareness, always, always be aware of your surroundings.

Then remember the three D’s:

Deterring causes a predator to lose interest in you. If someone is staring at you and you make eye contact with that individual, you eliminate the element of surprise, potentially deterring him or her from an attack.

Detecting allows you to appropriately assess and respond to a situation. Detecting potential threats at a distance gives you the opportunity to figure out what to do in that situation.

Delaying buys, yourself time to create more space between you and the threat. When you do that three things happen:

You are your first line of defense. Stay safe by taking proactive measures in monitoring your environment and making yourself an unattractive target.

Take active measures such as assessment and response.

Will you be ready?